You’ve been using your unique gifts and talents to make a difference in other people’s lives, yet you know in your gut that there’s something more for you. You may be unsure of what that ‘something’ is, but you’re being called to make a bigger difference in the world through your unique purpose.

The questions are all the same, but the answers are only yours.

We serve high-achieving
professionals and entrepreneurs…

who have mastered enviable success and yet, are confused or frustrated as to why they still feel unfulfilled in life. With channeled guidance, we offer coaching, leadership, and group courses to help you to discover, create, and live the life you were meant to live.

You’re in the right place. Take the steps with us and this channeled guidance so you can accomplish your next level of success and purpose by aligning your inner experience with your outer reality through science and spirituality.

You are at a moment of
choice in your journey.

This is your wake-up call to stay on your path and grow and expand
instead of reverting to old behaviors and paradigms. 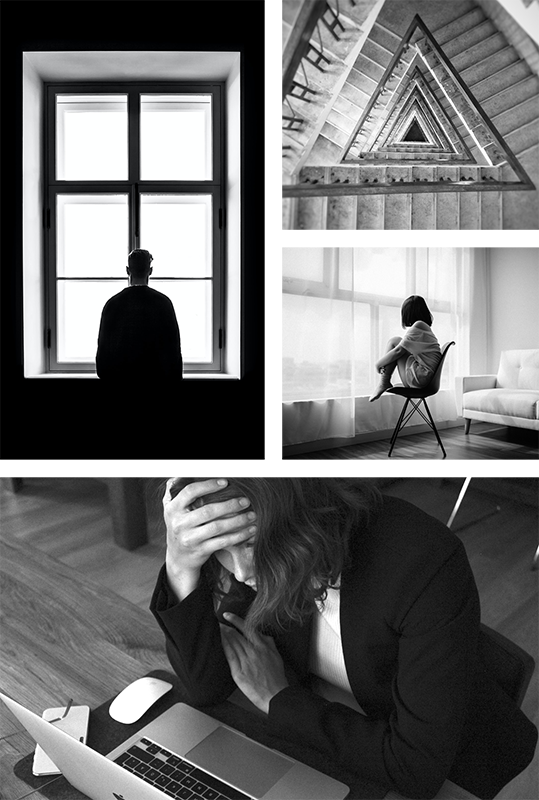 In your life, are you experiencing…

You may not know exactly why you’re here, but your intuition leads you to believe that there’s supposed to be more. You’re being called and despite being a high-achiever and accomplished individual, you have no idea how to get there.

We understand, finding purpose can sometimes feel like a relentless pursuit towards the next best thing. Whether you’ve lost touch of it over the years or need guidance in reconnecting with your true self, we’re here to help.

Only you have your unique purpose.

Your unique purpose is so much more than your ‘why’, it’s the who, what, and why of you. We help you discover, create, and live yours. 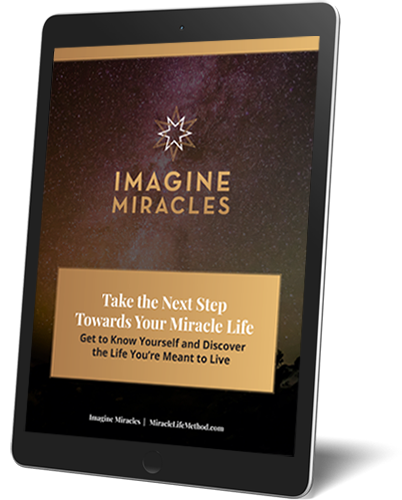 Take the Next Step Towards your Miracle Life

Discover exactly where you are on your journey towards your miracle life and become empowered to take matters into your own hands with the help of our free guide.

that the key to creating the life you’re meant to live is remembering and living your divine intent. This process is centered around Quantum Human Design, the Enneagram, and the top four levels of Barrett’s Seven Levels of Consciousness. 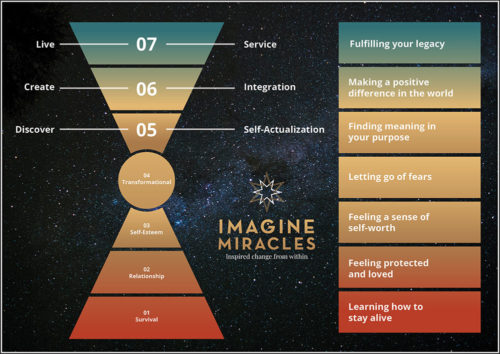 Click to enlarge graphic or if you want to see this image in full Barrett Values Centre Seven Levels of Consciousness, click here!

Everyone is born with a divine intent, but we forget it out of necessity. Once you learn how to live safely on earth and build the relationships that support you in your growth and self-discovery, you learn that you are being called. You awaken to the understanding that you are meant for more and it is time to follow that calling. Then and only then, you begin to evolve your perspective from “I” to “we,” incorporating your life’s purpose and how to implement it in a way that serves the world in the exact way you’re meant to.

We’ve designed our services to help you navigate the top four levels of consciousness. We identify your current level of consciousness and guide you through as you ultimately move into the level of service where you’re living the life you’re meant to live.

The Miracle Life Method includes each critical piece required to transition to the higher levels of consciousness and to live the life you were meant to live. Our services are intentionally created in order to guide you through this process. Whether it’s our masterclass, group coaching, one-on-one coaching, or one of our VIP Weekends, we support you through the journey of

discovering your unique purpose and how you can bring it to the world, creating an abundant life around that purpose and mission, and living that true purpose by making a difference in the exact way you’re meant to. The key to this method? You need all three in order to live the life you are fully meant to live. That’s where we come in. 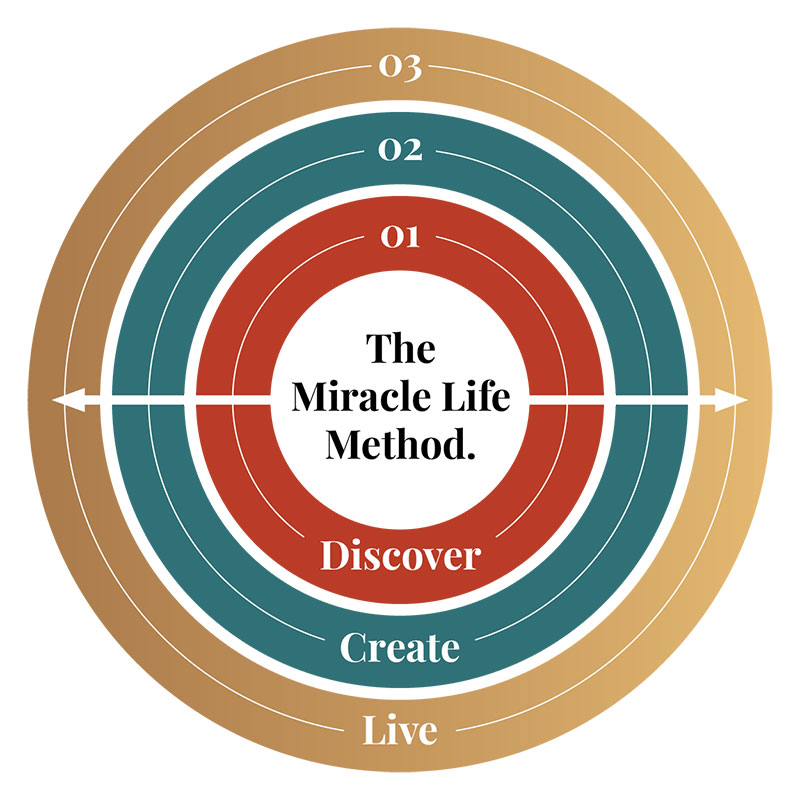 Take a Quantum Leap Masterclass
In this seven-week masterclass you will discover your true purpose, passion, and mission in life.

Quantum Circle
In this one-year group coaching program, we guide you towards creating a happy, healthy, and abundant life.

Bridge to Possibilities
In this VIP retreat and one-year coaching program, we guide you and a personal or business partner towards discovering, creating, and living your true purpose in life.

Quantum Immersion
In this VIP retreat and one-year, one-on-one coaching program, Vince personally guides you towards discovering, creating, and living your true purpose in life.

You are here for a reason, and there’s so much more to life for you.

In the Take A Quantum Leap Masterclass, we focus on discovery. With channeled leadership, we guide you towards discovering your purpose, uniqueness, and how to discover your own unique answers to take the quantum leap you desire.

Only you have your unique purpose.

Your unique purpose is so much more than your ‘why’; it’s the who, what, and why of you. In the Take a Quantum Leap Masterclass, we help you to discover yours by implementing Your Unique Purpose FormulaTM, which will guide you towards the straightest and shortest path to living a successful and fulfilled life.

Are you ready to discover your unique purpose and live the life you’re meant to live?

Not Sure if this is the Right Fit?

Schedule a Your Life Your Way Breakthrough Session! Together, we’ll dive deep to discover where you are at in knowing your purpose and living the life you are truly meant to live. We will take the time to understand what is possible for you and what your next best steps should be.

The Miracle You Podcast

Every Monday morning on The Miracle You Podcast, Vince Kramer interviews successful, heart-based people who are living the life they are meant to live on purpose. Each episode details a guest who has found his/her unique gifts and talents and are sharing them with the world.

Get to Know Us

Guiding successful individuals towards discovering, creating, and living out your true mission and purpose in partnership with channeled guidance is what we do. Doing it in a way that creates alignment and allows you to become the master of your own mind is who we are. Vince and Mary Kramer, a husband and wife partnership, inspire you to powerfully connect with yourself in a way that allows you to live an empowered life of your design.

As founders of Imagine Miracles, the two of them have always felt an energetic pull towards leading a community with a new paradigm of thought and life. Together, they’ve found their passion and purpose and lead others in the exact way they’re meant to. 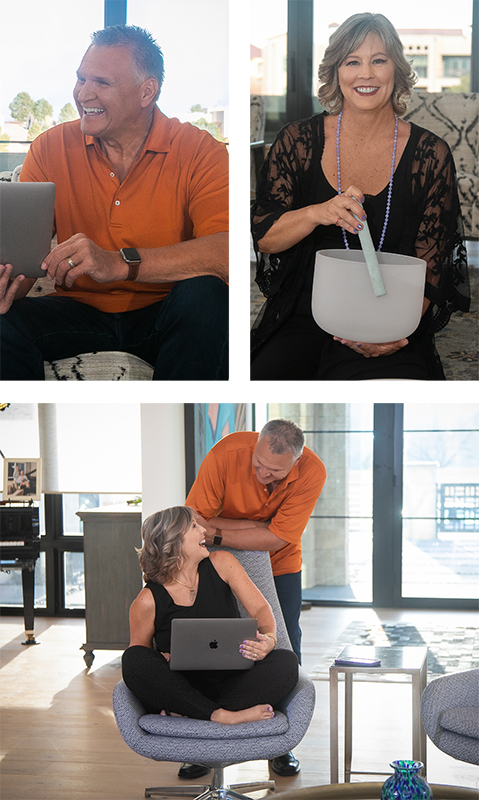 Your Self-Discovery Guide
Vince brings years of experience and self-discovery together with his love of science and spirituality to introduce you to your unlimited possibilities. He shares experiential exercises to help you find your answers to living the life you are meant to live. He guides you toward discovering your chosen destiny and mission in life.

Your Self-Reflection Guide
Mary’s expertise and ability to see your true identity set her apart from the rest. Mary can see what others can’t and will help you see what may be holding you back and how to move forward with great clarity. Mary enables you to raise and maintain your highest vibration through various healing modalities. She helps you successfully align your energy to feel your passion, purpose, and mission.

The heart-opening insight you desire.
A group of guides made up of your guides, Ascended Masters, and Archangels sharing messages conveyed through Vince will join you as partners in your journeys of discovery and empowerment. Like the story of King Arthur and his Knights, all who sit at The Round Table as equals come alongside you and assist you in finding your way, mission, and purpose in this world. Who better than the highest vibrational beings to do so?

If you had told Vince twenty years ago that this is where his life path would eventually lead him, he wouldn’t have believed you. As a successful airline pilot, corporate leader, and entrepreneur, Vince’s life was perfect in the eyes of others, but he knew something was missing.

Like many of us, it took him a series of wake-up calls before he paid attention and had no choice but to set out to find what was missing. What he found, he was missing.

In 2007, Vince began to move towards his calling in personal development when he started Imagine Miracles with the intention to help others live a life of happiness, health, and wealth. Around the same time, Vince was reintroduced to Mary. Through their energetic connection, he quickly realized that there was so much more he was meant to bring in personal growth and transformation, so he tabled Imagine Miracles to learn more and do his work, a necessity to help others.

“When we met, our energetic connection was something I couldn’t explain. It was different than anything I ever experienced.” – Vince

When Mary and Vince first met, that strong connection was enough to urge Vince to keep his distance from Mary. It wasn’t until ten years later when both of their lives led them to each other again that everything fell into place. According to Vince, Mary was his fourth wake-up call, a positive one that was exactly what he needed. In 2014, Imagine Miracles was re-born, and together they’ve created the life they were always meant to live.

Like Vince, Mary’s life was picture-perfect from the outside. She was living life on the outside before the universe gave her a sign that she was off track. Pain in her chest took her to a cardiologist who told her to change her ways or she was going to die. At that moment, she knew that she could no longer continue living the way she was.

With the doctor’s words, she experienced a moment of choice. Despite what others thought or believed was her next best step, she knew that she must move out of the old paradigm of thinking that was literally killing her and make a shift in order to live.

In 2007, Mary started making the changes in her life that she knew were needed for herself and her boys. She learned modalities that would help her on her spiritual journey and would help others on theirs in the future. She knew she wanted a like-minded partner to move into the new paradigm with. Around this time she was reintroduced to Vince and a friendship developed.

“Everything in my life led me here. From the time I was a little girl, I’ve been guided towards my answers.” – Mary

Mary’s deep knowing of her next move led her directly to Vince. Her spiritual knowledge was Vince’s missing piece, and Vince’s energy was exactly what Mary needed. Together they embarked on a journey of awakening, a journey where each of them would live the life they were meant to live as individuals and the life they were meant to live together. A life where they’ve created a successful business teaching others to do the same.

Book a Your Life Your Way Breakthrough Session with Mary or Vince at no cost. It is a one-on-one session that has a $500 value.

Fill out the contact information below and we will get back to you as soon as we can. We look forward to hearing from you!